It’s important to have a dream, isn’t it? Some dreams are big-scale – ending poverty, ensuring that all children receive an education and living in a world where Mary Berry is in charge and cakes are currency (we’re on the cusp with that one).

Most dreams are smaller in their ambitions but important to the people trying to realise them. They may involve ensuring your children’s future happiness or just clearing out that drawer in the kitchen which is inexplicably filled with take-away leaflets, a ball of rubber bands, endless bits of string and keys for locks which no longer exist.

One of my dreams (apart from all of the above) is to have a beautiful garden. Regular readers will recall the highs and lows that my husband and I have experienced since moving to the ‘money-pit’ last year. Aside from the leaking water, cracks in the walls and dodgy electrics, the garden has demanded our attention with the ferocity of an angry toddler. If there were a gold medal at Chelsea for, ‘most evil bramble,’ or, ‘world’s biggest dandelion,’ we would be in with a shot.

Sadly, we are gardening amateurs. We’re not used to this level of horticultural intensity. Our previous garden was the size of a bath mat. We’ve done our best but it is dizzying.

One week, we attacked the front garden, cutting, weeding and spraying prodigious amounts of chemicals, which carried more warnings than a nuclear power station. Meanwhile, the back garden spread its roots and grew to heights not previously seen since Prince Charming was faced with ‘thornageddon’ during attempts to reach Sleeping Beauty.

The following week, we took on the back garden, whilst the front garden (knowing we weren’t looking) clearly entered a competition to, ‘grow as many weeds as possible in seven days.’

One of the things we needed when we moved into the money-pit was a new fence. We parted with the GDP of a small African country and now we have one. It is lovely and during the re-building process, an extra patch of soil was created and with it my new dream.

The patch is about fifty feet long and six feet wide and as soon as I saw it, my little brain got excited and made me fetch my, ‘Grow Your Own Vegetables’ guide. I have lots of books like this – little volumes of dreams, as yet unrealised. I also have one all about bread-making and another (rather ambitious one) which encourages you to have a completely home-made Christmas. I haven’t opened it yet.

‘We can grow peas, carrots, runner beans, lots of herbs and fruit trees – we have to have fruit trees!’ I told my husband one Saturday morning, having looked at all the pictures in the book but none of the words.

‘Sounds great,’ he replied. ‘Shall we go to the garden centre this morning?’

A Saturday morning trip to a garden centre (with cake and coffee obviously) is my catnip but I resisted. ‘I think we need to have a look at the soil first. It might need to be improved.’ 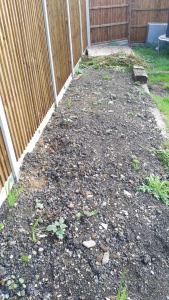 In our house I am the gardening expert because I watched a whole Alan Titchmarsh series once, know the names of all the Gardener’s World presenters and have successfully grown tomatoes in pots.

I fetched a small garden fork and gave the ground an experimental prod. It bent one of the tines. I looked up at my husband.

I gave the ground a liberal dousing and then tried again. It was as hard as the ‘Panettone’ I’d made the Christmas before last (I use inverted commas here because without them it would be insulting to proper Panettone)

‘Maybe we should try with this?’ suggested my husband carrying a large garden fork. I stood back and try he did. In fact, he tried so hard that he dug up a huge slab of concrete and a dandelion root the size and shape of a large parsnip.

‘I think we are going to have to improve the soil,’ I concluded.

So that is what we have done, reader friends. Over the course of several weekends, my husband and I have dug over each section of soil. We have pulled out pieces of rock that look as if they’ve come from the moon, extricated gigantic weeds and held up gnarly tree roots for inspection like a fishermen showing off a prize Bass. We have dug over, raked and made friends with worms. We even bought a wheelbarrow, for Dimmock’s sake! It took flipping ages and we only managed about half the stretch but it was oddly satisfying and once done, it looked pretty good – a blank canvas ready for something wonderful. I went to bed that night dreaming of parsley, sage, rosemary and thyme. Paul Simon was there too for some reason.

The following weekend we decided to attack the next section. My husband strode down the garden to review last week’s work with me following closely behind. My heart sank as I looked at our newly cultivated soil, now covered with a multitude of tiny turds

‘Yes,’ he replied. ‘We have managed to create a great big cat and fox toilet.’

And so we had but you know what? All dreams face set-backs and the best dreams take hard work, perseverance and cat repellent. I will have my beautiful garden one day. It’s just a work in progress.

3 thoughts on “My beautiful garden”