Since Not Quite Perfect was published nearly two years ago, I have become resigned to the fact that my life mirrors the title of this book with frightening accuracy. Indeed the phrase has become widely used by all members of my family; whilst appraising an overcooked but still edible dinner for example, or my husband’s courageous attempts at DIY, of which more later.

Regular readers of this blog may remember that my family and I recently moved to a house which we refer to as, ‘the money-pit’. In six months it has required re-wiring, new gutters, fences, loft insulation and quite a bit of plumbing. It still needs new windows, damp-proofing, a new kitchen and bathroom. But it will just have to learn to be patient. We’re not made of money.

One of the best things about the house (apart from the wide-faced, grumpy black cat who thinks he owns our garden) is my writing room. I realise I am ridiculously lucky to have an actual writing room and I cherish it but as you can see, it needs work. 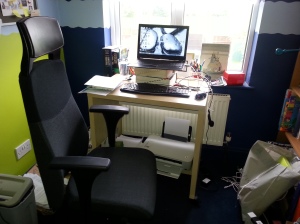 Firstly, it needs to be re-painted. I can only imagine from the bogey-green, midnight-sky walls with their wavy blue border and Buzz Lightyear stickers that a small person once inhabited this space. The colours are as over-stimulating as a Candy Crush Sugar Rush. In lots of ways it kick-starts my brain into gear every morning but in other (more important) ways, it doesn’t feel right for me.

Beyond this space, I am a woman possessed. As many of you know, a life revolving around the needs of children is not a straightforward one. It seems to involve a series of opposites for me; drop-off, pick-up, load, unload, pack, unpack; all done at optimum speed.

As a result I need calm within these four walls. I need a space that says, ‘this is where you create stuff, where you can think and just be.’

Re-decorating is fundamental to this and will probably involve discussions about ‘egg-shell’ and ‘duck-egg’ and possibly eggs in general.

Secondly, I need a new desk. As you can see my laptop balances precariously on two German dictionaries (I knew that degree wouldn’t be wasted). The desk is a computer desk for computers and is only as big as a computer. The clue’s in the name.

This is fine when I’m writing a first draft but when it comes to revisions, I like to spread out. I like to use my dictionary (given to me by my Dad in 1989; the words are pretty much the same – I’ve checked), my thesaurus and my Oxford Guide to English Grammar. But you need space to do this. Perching them on top of the paper shredder just isn’t the same.

I would also like an armchair; a fat squashy cast-off, in which to curl up and read. In my head, I am an organised writer. I drop my children at school, skip home (so far as you can skip in a Skoda Octavia), make coffee and write all morning. After a light lunch (move away from the fish fingers, lady), I will digest the morning’s work, answer correspondence and settle down to read. In my heart, I know I will probably never be that person (I like fish fingers too much) but a big old armchair might make it possible at least once a week.

Finally, I need a new blind. My room overlooks the garden and beyond that is a sports ground. On Sunday mornings, there are often men swearing at the bottom of the garden whilst attempting to play football. My son thinks this is fantastic but has been told never to repeat anything he hears to Grandma. The rest of the week, it’s fairly peaceful apart from the odd dog-walker or the groundsman, who drives his tractor up and down the pitches like Lewis Hamilton after one too many Fruit Shoot. It is also south-facing and therefore I get a lot of sun. This is lovely unless you’re trying to write or avoid retinal damage. The windows were bare when we moved in. I managed to lasso an old curtain around the existing rail for the first week or two, but a blind was added to the list for one epic visit to Ikea.

I appreciate there are no other types of visit to Ikea. I could probably start a whole blog about our ill-fated trips to Ikea so I’ll spare the details and just say that we bought a blind; the cheapest one we could find because by that stage we were so fed-up, we were close to buying a bath-towel and super-gluing it round the window.

(Regular readers will know how good I am with super-glue – for the uninitiated, follow this link to a post from March for further evidence… https://annielyons.com/2015/03/30/the-day-i-superglued-my-trousers-to-my-leg/)

The following weekend my husband announced that he was going to put up all the blinds and curtains and possibly some pictures too. This was before he realised that the walls were harder than Vinnie Jones. Being a kind and decent man, he started with my blind. Three hours later, after a lot of swearing and several broken drill bits, the blind was up. He looked jubilant and I was grateful for his efforts. The alarm bells sounded when I realised that there was no pully chain thing at the side.

‘How does it go up and down?’ I asked, keeping my voice light in order to mask the concern.

My husband pulled the tab in the middle of the blind. The whole thing unravelled to the floor. We looked at each other. I could see that his sense of humour level was dangerously low.

‘It’s fine!’ I trilled. ‘Let’s just have a look at the instructions.’ We stared at the piece of paper for a good three minutes. As you may know, the level of detail in instructions is directly proportional to the amount you paid for your item. Therefore, our cheap (and not very cheerful) blind had instructions which were as useful as a marshmallow frying pan. Happily, my husband speaks word-for-word translated Swedish and managed to work out how to roll the blind up and then attempt to lock it into place. Unfortunately it ended up being locked half way down the window and to this day, we have no clue how to release it. This is perfect when it’s sunny but means that I need the light on for most of the year. A new, possibly more expensive blind is now required.

So, my writing space mirrors my not quite perfect life and maybe it’s time to change that.

Maybe it’s time to establish the calm, spread out a little and let the light in.

On the one hand I should end up with a more creative writing space but equally, it’ll give me a veritable bounty of blogging material whilst I work towards it. 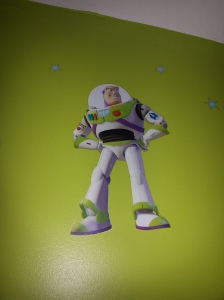 4 thoughts on “My not quite perfect writing room”